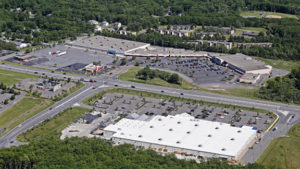 Ollie’s new Mt. Pocono store joins 30 additional locations that opened in 2017, including two in Pennsylvania. Ollie’s is a fast-growing value retailer that differentiates itself by offering “good stuff cheap.” They recently celebrated their 35th anniversary and currently operate over 250 stores in 20 states.

The new Planet Fitness at Mt. Pocono Plaza is the chain’s fifth location within a 30-mile radius of Mt. Pocono, PA. It will be open 24/7, allowing members to take advantage of its Judgment Free Zone® at all times. Planet Fitness has over 1,400 locations in 48 states and is one of the largest and fastest-growing franchisors and operators of fitness centers in the United States.

The addition of these new tenants is an important milestone for Mt. Pocono Plaza. Heidenberg Properties Group thought it critical to find the right replacement tenants since Kmart announced the closing of its 86,000 square foot location in July 2015. Despite the loss of Kmart, other Mt. Pocono Plaza tenants have performed well, as evidenced by the multiple renewals and new leases, including the opening of Pet Valu this past July and a new 23 year extension with McDonald’s. Great opportunities are available to locate with these new tenants, as approximately 42,000 square feet remain at the former anchor space.

By tapping into the value and fitness segments with Ollie’s and Planet Fitness respectively, the center’s owner is responding to the desires of the market. According to Ken Simon, VP of Real Estate for Heidenberg Properties Group, “Ollie’s and Planet Fitness are examples of where retail is heading today. These two tenants offer superior in-store experiences, whether its Planet Fitness’ hassle-free environment or the treasure hunt atmosphere found at Ollie’s through their compelling bargains. We are excited to be partnering with these two growing companies.”

Located on Route 940, Mt. Pocono Plaza counts Weis Markets, Dollar Tree, Rainbow, McDonald’s, and Pet Valu as major tenants. The area enjoys a vibrant tourism market and features over 2,000 hotel rooms within a five-mile radius of the center, and over 25.6 million annual visitors within a ten-mile radius.